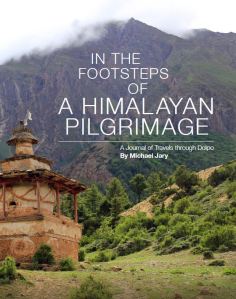 In the Footsteps of a Himalayan Pilgrimage is the account of a journey which I undertook in June and July 2013 to Upper Dolpo, an isolated frontier region along the border between Nepal and Tibet.

At various times falling under the rule of Tibet and then the king of Mustang to the east, Dolpo has nevertheless remained largely inaccessible as its deep valleys are protected by high mountain passes. No road reaches into Dolpo and the only air landing strip is currently unusable. The locals can move in and out only by long, arduous journeys on foot or on horseback. The region has only recently been opened to international visitors willing to acquire expensive permits and charter a helicopter, and few have ever been.

The attraction of Dolpo lay partly in the challenge of the journey and the unique scenery of the Himalayas, but also in the opportunity to observe the continuing practice of an esoteric Tibetan Buddhist culture carried on much as it has been for over a thousand years, and the accompanying art, artefacts and architecture of the monasteries. Such physical and spiritual treasures have been lost in Tibet and are now only extant in the a few Nepal frontier regions of which Dolpo is probably the most untouched.

My objective was to visit Nesar monastery in Bhijer where a recent discovery has been made of Buddhist manuscripts dating from 11th to 16th centuries. I succeeded in meeting the lama of the monastery and photographing what are some are some of the earliest dated Tibetan manuscripts now extant. These photographs are now being studied in SOAS in London and at the Harvard School of Divinity.

This book is the contemporaneous journal of the expedition, accompanied by illustrations of the scenery, people and art of Dolpo including the Bhijer manuscripts.

How to Buy the Book

This book is only available through the Blurb bookstore, which avoids the extra costs of publishers and retailers. It sells at the not-for-profit price of £50, of which £40 is Blurb’s printing cost and £10 (plus a tax credit) will be sent to two causes, a health centre and a school, which I visited in Dolpo and which will benefit very much from your support.

You can buy the book by visiting the Blurb bookstore:
www.blurb.co.uk/b/4798185-in-the-footsteps-of-a-himalayan-pil